I was 16 when I first heard those dulcet tones, talking about sex and farting and celebrities and how much better Howard Stern was than all the Morning Zoo DJs he was going to send to the unemployment office.

And for the last three months of my junior year of high school, Howard Stern helped me survive excruciating pain, probable depression and definite loneliness.

If you’ve never woken up in agony, I don’t recommend it. I was in the throes of what would be misdiagnosed several times, but the upshot is that I had severe pain in my legs — it felt like they were in an ever-tightening vise if I sat up with them hanging over the side of the bed or a chair.

So I’d wake up, take my pre-laid-out medication with warm water that had sat by my bed all night, and turn on the neurotic New York nuttiness that was the Howard Stern Show.

And with his cadre of kooky characters — Boy Gary with his teeth, Frightening Fred Norris, Jackie The Jokeman, Stuttering John, and the “voice of reason” Robin Quivers — they took my mind off of my problems and pain. 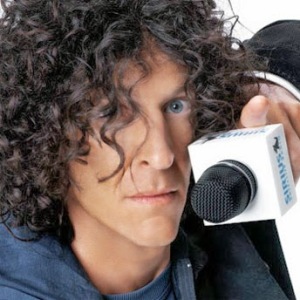 Twenty-five years later, there he was again. Driving to work, in desperate need of a laugh, I flipped on Howard 100 (thanks SiriusXM).

The next 15 minutes of my commute were an escape.

—  Howard was talking about something as ordinary as his cat Yoda.

—  And then Mariann from Brooklyn called in, with her “nails on your spinal cord” voice.

—  And then the news, intro’d with a song parody of Jay Z’s “Empire State of Mind” that sang the praises of Robin’s breasts.

—  And then somehow, the subject turned to a Wack Packer-type named “Tabboo” from the mid-’90s, who was memorable for his/her song?/rap? called “It’s Natural” in a voice that haunts my dreams.

—  And then the always-reliable Fred cueing up the song right away.

—  And then Robin steers back to the news, and Howard riffing on it.

(I always told people who said they didn’t like Howard to listen during the news — that they’d see him for what he is — an  insightful, observational comic, a brilliant interviewer and basically a fucking genius.)

—  And then he did a live read of an ad with the same voice I remember, lying in my teenage bedroom with the Kathy Ireland Sports Illustrated Swimsuit Calendar posters. The voice that started my day with celebrities, boobs, ratings battles, fart sounds and laughs — and helped me to survive all that I was going through — back in 1986, and today in 2014.

Thanks @HowardStern. You’ll probably never read this, and I know there are thousands of stories just like mine.

Just keep doing what you do as long as you can.

And Baba Booey to you all.